Panic In The Gravel 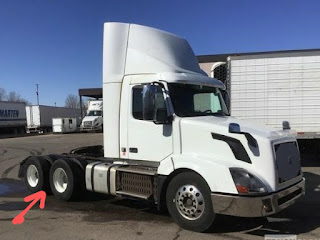 When I was in Michigan truckdriving, I drove for a company that mostly hauled office furniture, but a small part of their business was baby formula. A well known brand of infant formula was produced near the company’s base in West Michigan. A truckload of product was worth about a half million dollars. And - if you’ll pardon the pun -- it was a highly liquid commodity.

The trucking company and the company that produced the formula feared that someone could hijack a truckload, roll into practically any location, and sell the formula out the back of the trailer before the cops could show up. Hence, the rule was that the driver who picked up the load had to drive 250 miles without stopping to reduce the chance of a possible hijack.

The infant formula always went the same route: the plant was in Zeeland, Michigan and the formula had to get to a warehouse in Mt Vernon, Indiana outside Evansville. Back then the most efficient route was to head down the west side of Indiana. US41 was a lonely road through miles and miles of dairy farms and cornfields. A huge wind turbine farm along the way was the only break in the monotony. After running the formula down south, the driver would pick up a load of drawer slides that were manufactured in Southern Indiana and bring them right back to the furniture manufacturers in West Michigan.

The biggest trouble with driving 250 miles without stopping … was coffee. I needed some to get my mojo up for the drive, but eventually the coffee and nature would call. The 250 mile mark was about two thirds the way down the length of Indiana; just past I-74. However, I often snuck a quick pit stop at the exit off I-65 near Roselawn. This was where I cut across to US41 from the freeway and the long exit ramp made for an easy place to quick pee on the gravel shoulder or in a bottle; depending on the weather.

On one particular night, as I approached the Roselawn exit, I started to hear a grinding noise from behind me near the drivetrain. I pulled over on the exit ramp and called the night mechanic. He knew the trouble before I finished my sentence and had me get out to confirm that the tractor suspension was low.

Below the catwalk and between the drive axles of the truck was a lever arm to control the pressure in the air bag suspension. The end of that lever was secured with a small plastic part. When that part breaks, the lever arm sags out of position and the airbags deflate. This caused the back of my tractor to sag. The grinding noise I had heard was the driveshaft struggling to spin; it wasn't designed for highway speed and deflated air bags.

Road Service would take two or three hours to get to me or if I had some zip ties or duct tape, I could crawl under the truck and reconnect the lever arm. I liked the idea that I might be able to get myself back on the road, so I volunteered for the latter. I dropped the trailer and moved the cab up about ten feet. The easiest approach was to crawl between the drive tires on the right side. Actually, I can’t remember if I decided that or if it was suggested to me, but it led to a pretty healthy panic that surely cost me a couple years of longevity.

I grabbed three or four zip ties and wiggled my way between the tires (I was skinnier then). Coming in from the side indeed led me right to the lever arm. I raised the arm back to horizontal and immediately saw where it had to be reattached. To secure it with a couple zip ties was an easy fix. The mechanic had told me there wasn’t much stress or strain on the attachment. This is exactly why Volvo thought they could get away with a fragile little plastic part. The shop would do a proper repair when I returned.

The truck’s engine was off but the air tanks were full. As soon as the lever arm was back in position, the air bags started to refill. In between the tires with my back against one and my belly touching the other, I suddenly felt the truck moving!

It’s a hell of a thing to be lying in the gravel on the side of an exit ramp in Indiana and to suddenly feel like you were about to be run over by your own truck!! I.had.a.moment.

After a few seconds of blind panic, I realized that what I was feeling was just the suspension wiggling as the air bags filled. Brakes were applied, the stopped engine was in gear, and the tires were not going to turn. They would move enough to make me almost shit myself but all was OK.

I wriggled my way back out, took a deep breath of free air, and carried on driving in the foggy darkness down US41. Wide awake now. I wasn't going to need any more coffee; maybe for a couple days.

Character Sketches from the Road

I had stumbled back to truckdriving just before Christmas last year. The engine on my sv Ruth Ann was kaput and I needed to raise the funds ... 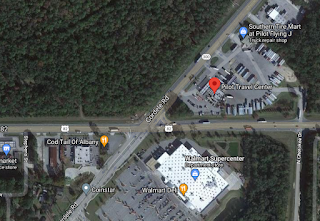 Bubba the Pirate
Bubba is a vagabond and a writer who is traveling the U.S. East Coast, the Caribbean and Central America aboard a Bayfield 29.